HOW TO BE IRRESISTIBLE 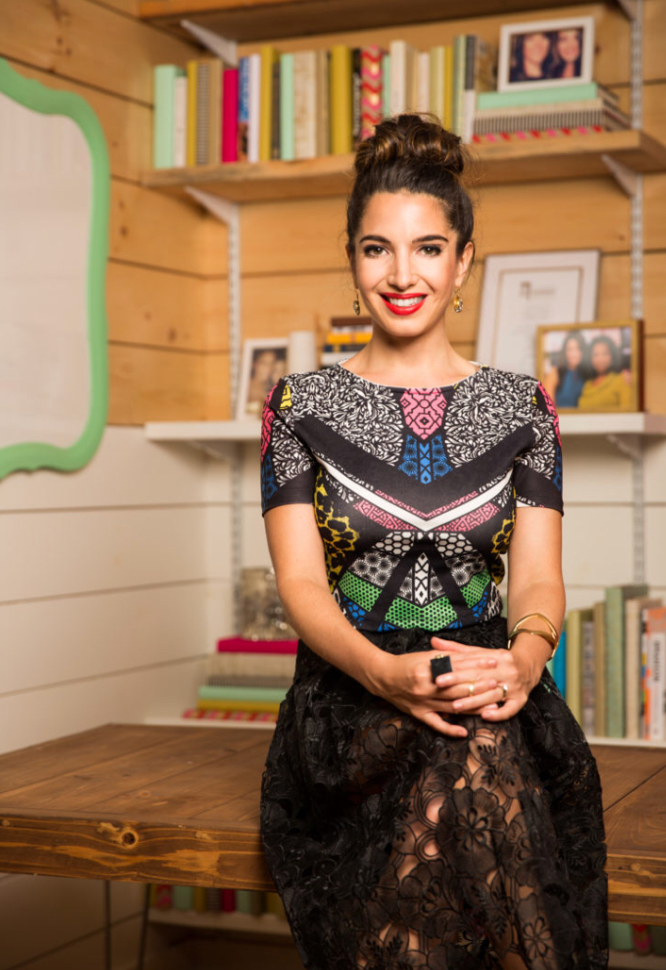 In the brave new world of business that has arisen with the growth of the web, there are many types of entrepreneurs. There is the planner, who plots every move from the beginning, never a scandal in sight. There is the accidental entrepreneur, who falls into a business and makes it work. There is the enfant terrible, such as Mark Zuckerberg, who was likely always going to be successful, but couldn’t have anticipated the impact Facebook would have on the world.

And nestled neatly within the pack there is the visionary, the type of entrepreneur that could just as easily pass for a seer such is their knack for knowing what to do and when to do it.

Marie Forleo, the founder of Marie Forleo International, is nothing if not a visionary.

Forleo’s first rule of business is to lead with your heart, and it is safe to say that in 2015, with 14 years of entrepreneurship under her belt and an eight-figure business, Forleo’s heart has served her well.

Marie was named by Oprah as a thought leader for the next generation and one of Inc’s 500 fastest growing companies of 2014. She reaches over 275,000 readers in 193 countries worldwide and leads dynamic training programs that teach individuals to succeed in business and life. She’s the creator of the award-winning show MarieTV and has been featured in Entrepreneur Magazine, Fast Company, Glamour Magazine, Self Magazine, Forbes.com and The New York Times among others. Marie has been interviewed by Tony Robbins as one of the world’s leading lifestyle and online marketing experts and mentored young business owners at Richard Branson’s Centre of Entrepreneurship in South Africa. Her bestselling book, Make Every Man Want You: How To Be So Irresistible You’ll Barely Keep from Dating Yourself is published in 13 languages. Through her Change Your Life, Change The World® initiative, each for profit training program is tied to a non-profit partner who supports women, the environment and entrepreneurship.

Choosing whether to follow her heart or listen to her head, however, hasn’t always been easy. Forleo openly admits to questioning herself and wondering whether it was all worth it, “but I had this deep feeling in my heart that I was doing the right thing.”

So, how did she do it? It all comes back to that inner voice and a side of hustle.

Do what feels right.

When Forleo graduated college, she went straight to work on the floor of the New York Stock Exchange, a place she describes as dynamic. But a nagging voice inside Forleo’s head told her this was the wrong path and that she was meant to do something more with her life. Forleo listened. Her fledgling Wall Street career stopped in its tracks, and Forleo moved on to the bright lights of the magazine industry, taking up positions at Gourmet and Mademoiselle. Soon, however, Forleo started having “that same sick feeling inside.”

“I looked ahead at the editor-in-chief and I was like, ‘Gosh, I just can’t see myself in that role. I don’t think that’s where I want to go.’”

And that is when Forleo’s inner-visionary first kicked in.

“At that time, the Internet was just kind of, you know, coming around,” says Forleo. “And I stumbled across this article about a new profession at the time called life coaching … [and] it sounded amazing. It opened my heart, it felt right, but my logical brain said, ‘Who the heck is going to hire a 23-year-old life coach?’”

“I was skeptical and cynical about myself but at the same time my intuition was speaking louder than it had ever spoken before,” Forleo says. “I signed up for a three-year coach training program through Coach University and I started studying at night.”

Forleo kept her day job at Mademoiselle, and six months later its parent company Condé Nast offered her a promotion: a job at Vogue, long considered the holy grail of fashion magazines. For Forleo, though, this was a fork in the road, another battle between heart and head. 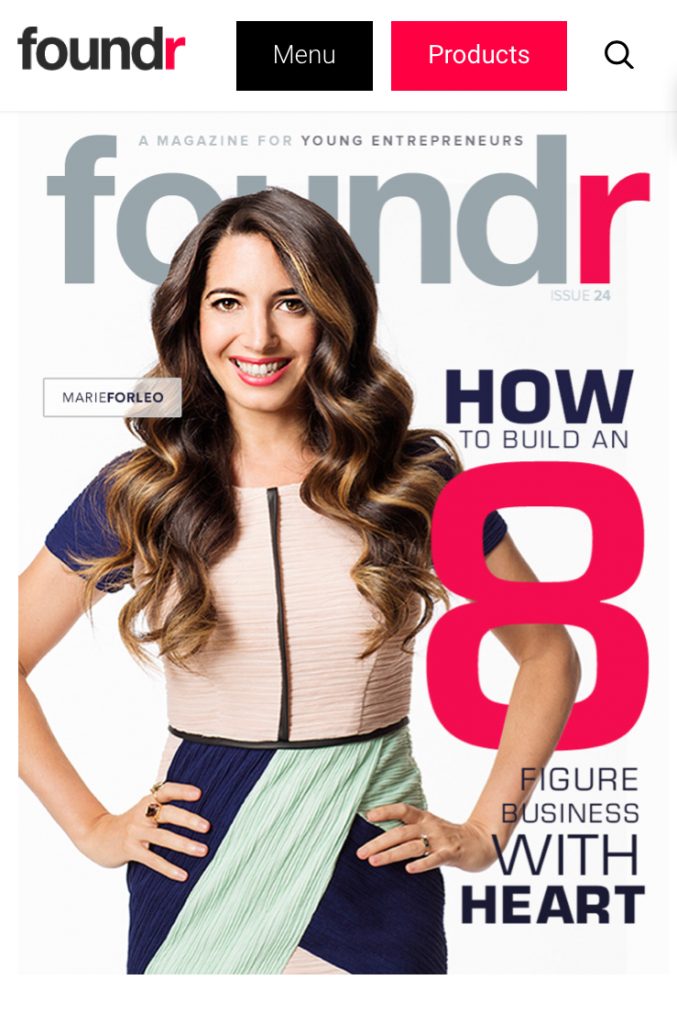 “I had to make a choice,” says Forleo. “I was like, ‘Okay, am I going to stick with the steady paycheck or am I going to do this crazy weird thing that even I’m skeptical of, yet it feels really right?’”

Naturally, Forleo led with her heart.

She quit her job with visions of starting her life-coaching business dancing in her head, and picked up side jobs — bartending, waitressing, working as a personal assistant — to cover her rent and bills. During her off-duty hours, she started building her business.

Fake it until you make it.
Forleo describes herself as a “real veteran” when it comes to doing business online, and she’s not wrong. She launched her life coach business in 2001 with nothing but a digital newsletter, which at the time was a very novel idea. But one of her more innovative moves was to use the Internet to conquer her initial dilemma: would her clients take her seriously? To do so, she employed the unspoken first rule of entrepreneurship: fake it until you make it.

“I was so insecure about my young age that I used the Internet to effectively mask how young I was,” says Forleo. “I never lied but I went out and I had headshots done and they were black and white, and I put on my makeup in a certain way and I had a particular haircut [so] that I probably looked 10 to 15 years older than I actually was.”

“I did my best to create content and to put out newsletters that were as professional as possible, and I started building a client base,” she says. “My clients, because we coached over the phone, had no idea how young I was. They didn’t ask, and I didn’t tell.”

The move paid off in spades. Soon, Forleo had a fledgling coaching business that gave her the opportunity to understand “how to market and sell effectively, how to connect with people emotionally, and how to really build something from the ground up.”

But just like it had before and would again, Forleo’s inner voice came calling.

Don’t label yourself.
This time, Forleo’s heart was fighting with her head over the focus of her business.

While studying to be a life coach, the importance of picking a niche coaching area had been drilled into Forleo, but she struggled with choosing just one field. Additionally, Forleo felt her other talents — dancing and fitness — were being pushed aside in favor of her business.

Do what feels right for you.
While Forleo has plenty of advice for budding entrepreneurs, not to mention an extremely successful business development course that has won praise around the world, she eschews the idea that there is a set of hard-and-fast rules for building a business.

The most successful entrepreneurs, Forleo says, know that the most important thing to do is listen “to your own wisdom, despite what everybody else says that you should do.”

Accordingly, Forleo believes it is more important to advise unseasoned entrepreneurs to make smart decisions for themselves, prompting them to cast aside what experts are saying, what the industry is saying, and where the market is heading.

Listening to her own instincts — whether it was quitting her job at Condé Nast with the vision of starting her own business, knowing that she needed to let her entrepreneurial spirit run free if she wanted to feel fulfilled, or realizing that she had to inject her heart and soul into every piece of content she produced — is no doubt what has made Forleo as successful as she is.

Accordingly, perhaps the only piece of Forleo’s advice you should really listen to, which could be worded in a thousand different ways, is her original business ethos: lead with your heart.

61 responses to “HOW TO BE IRRESISTIBLE”